As we now know, there were many anomalous happenings going on throughout Arizona for many hours on March 13, 1997, including a parade of different craft and multiple orb formations attached to and separate from these craft. The goal of this project is to bring to awareness the complex and complete nature of the various Phoenix Lights events that occurred that night. By using the latest technologies of Google Earth, Larry Lowe has molded the multiple mass sighting reports into stunning visual illustrations so we can understand what these phenomena looked liked, as well as where and how they traveled. We call this grand endeavor the Geospatial Animation Project.

In a coordinated effort to correlate time lines and witness observations, information for the simulations were provided by reports compiled by investigators, Michael Tanner and William Hamilton (Skywatch International), from the combined database of Village Labs, interfaced with reports provided by the National UFO Reporting Center (NUFOC) in Seattle, Washington and those of former councilwoman, Frances Emma Barwood in the weeks and months following the March 1997 incident. This is a combined effort, with the support and input of AZ MUFON, the Mutual UFO Network. We're talking team work!

The samplings below are but the first in a series of forensic simulations of the events that took place throughout AZ on March 13, 1997, based on multiple witness accounts.

It becomes apparent when looking at times, location and object description that there may have been as many as 8-10 different large objects displaying themselves in Arizona that night, with perhaps as many as two dozen separate sorties--one flight path by one object. This does not include the many reports of groups of lights seen in formation or flowing individually.

Although not the first appearance of unknowns on March 13th, the main events of the day were signaled within 30 minutes or so of each other, beginning at 7:50 pm in the Prescott Valley area by the convergence of three, possibly four objects having a V configuration. They came from the NW, then turned to the South toward Phoenix. The various V formations continued to the south and then generally to the SE, as far as the Tucson area and then reappeared later over metropolitan Phoenix at various locations and times. It is interesting to note that the collective flight paths of the UFOs placed them over the most populated areas of Arizona and along its most heavily traveled routes, even the airport, while avoiding restricted military airspace. This was clearly a very purposeful "demonstration".

Note that these renderings are the initial illustrations, as created by Larry Lowe, and will be updated and refined as more detailed and accurate information pertaining to the sightings reports and flight paths becomes available. 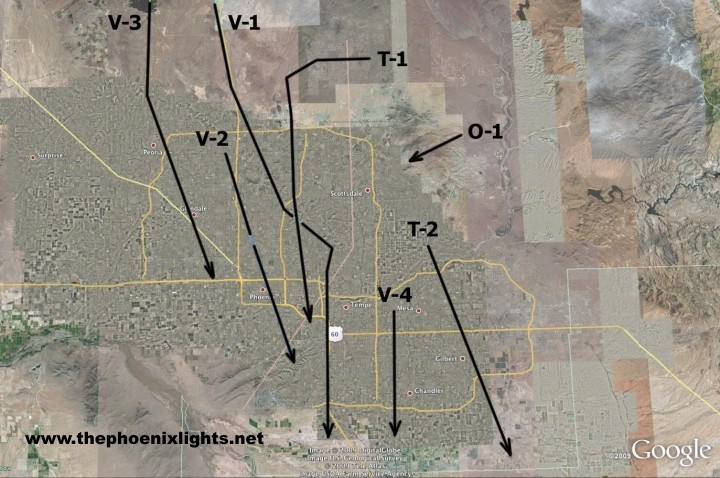 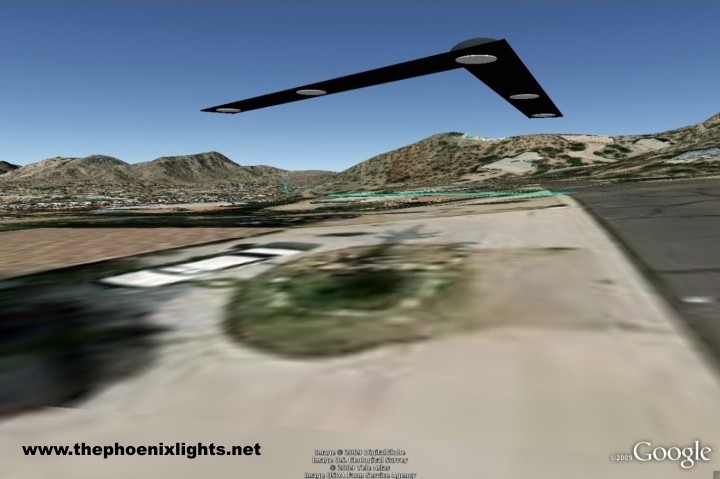 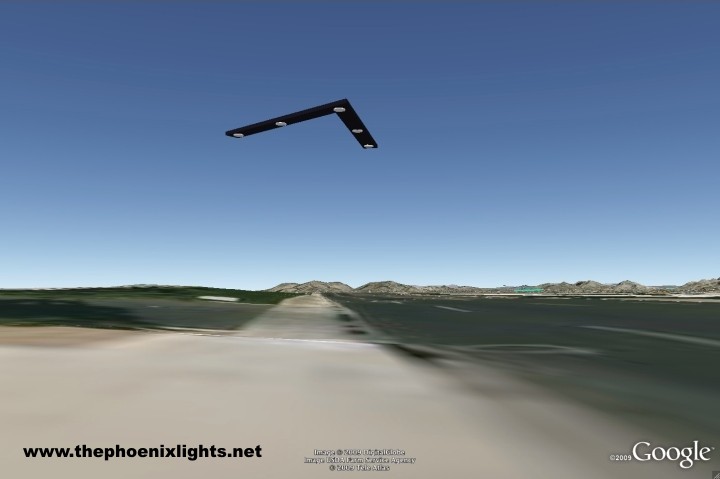 V-2 Similar to V-1, no canopy dome. Has height. Hovered over 7th and Indian School and vanished from that location when fighters approached, reappeared after they had left and proceed to South Mountain. 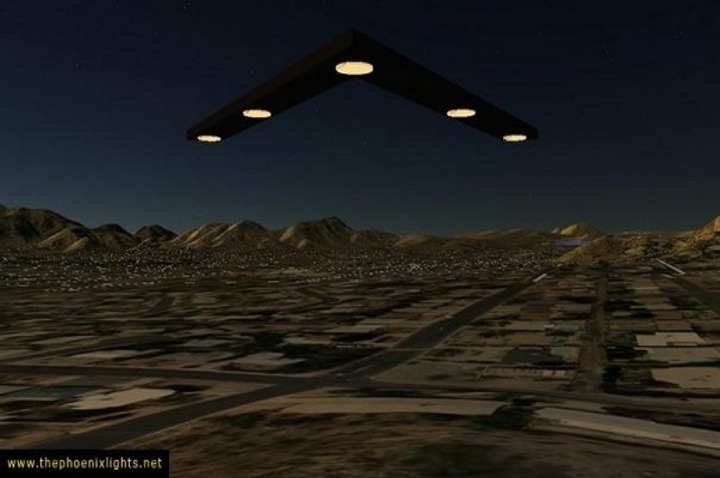 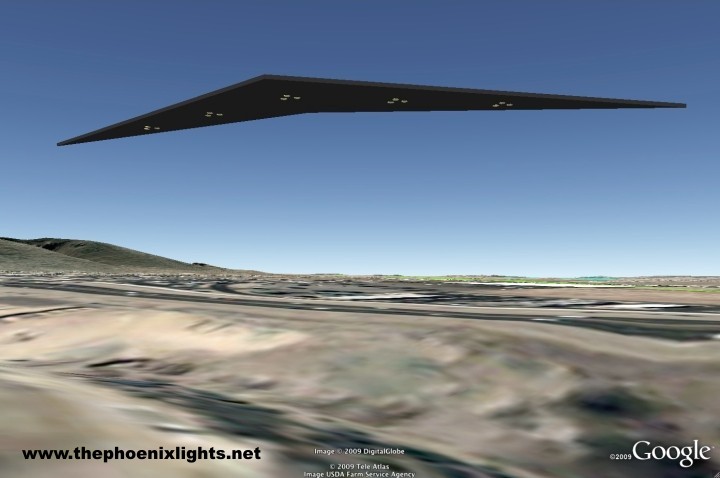 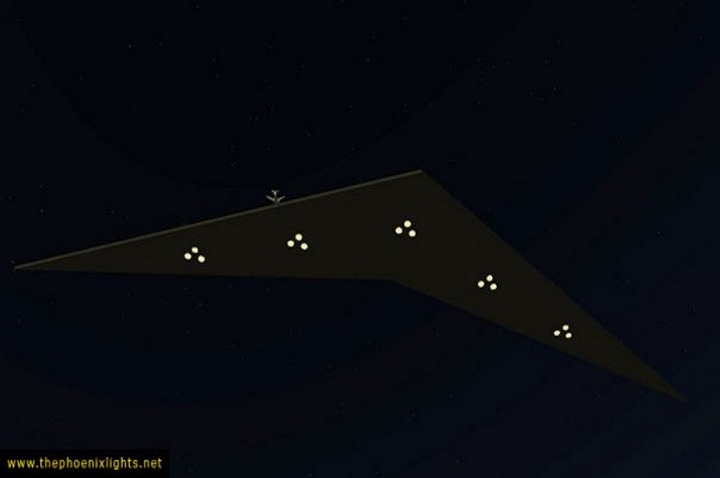 The High Altitude wing was a double-tapered v-shaped wing with a distinguishing arrangement of five sets of three lights. This craft was encountered by an America West flight at 18,000 feet on the northern edge of Phoenix. 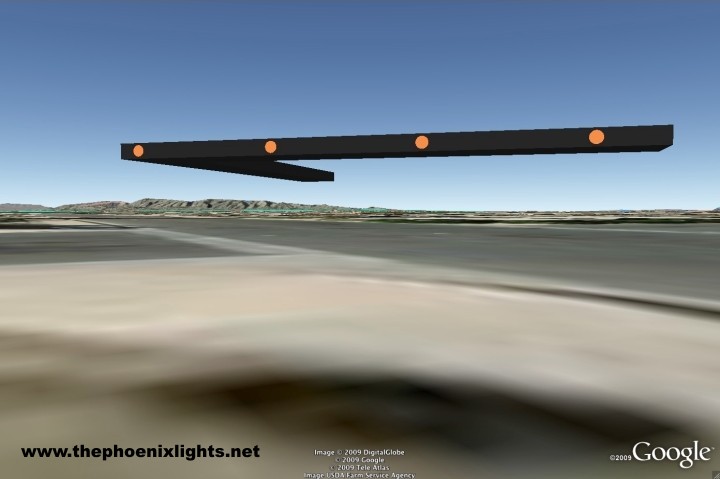 V-4 Mile wide v-shaped object 90-degree sweep, amber/red lights on side, trailing red orb. First seen descending under the downwind leg for approach to Sky Harbor at something like 1500 feet AGL. Cruised past observer at 300 feet or less and was seen to fly in front of moon, which shown through the object as if it was translucent. 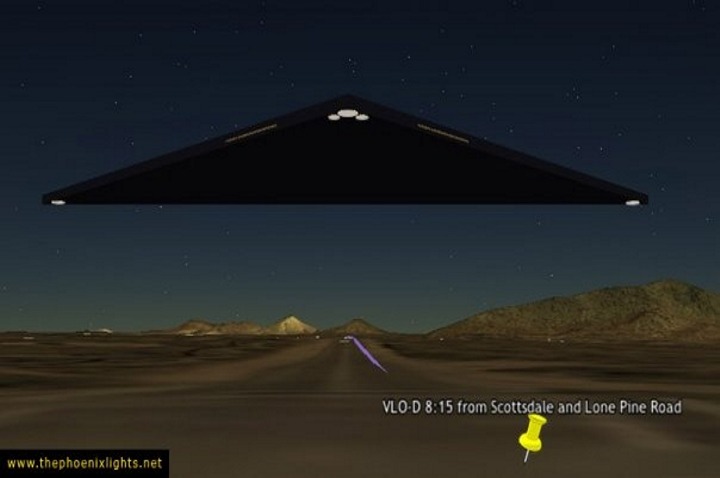 The Sky Harbor Triangle was truly massive, described as 1 to 1.5 miles long from nose to trailing edge and 2 to 3 miles wide from wing tip to wing tip It cruised silently through the valley and hovered short of Sky Harbor International before shooting straight up out of sight. 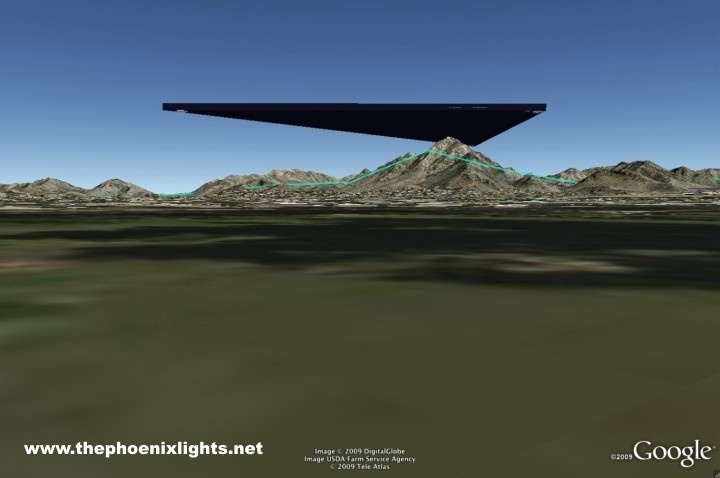 T-1 Mile wide black triangle, variously reported with many lights, windows and no lights. First observed at Scottsdale and Pima. Tracked West then turned south down I-51. Over flew Squaw Peak and then crossed over Sky Harbor IAP to the south. 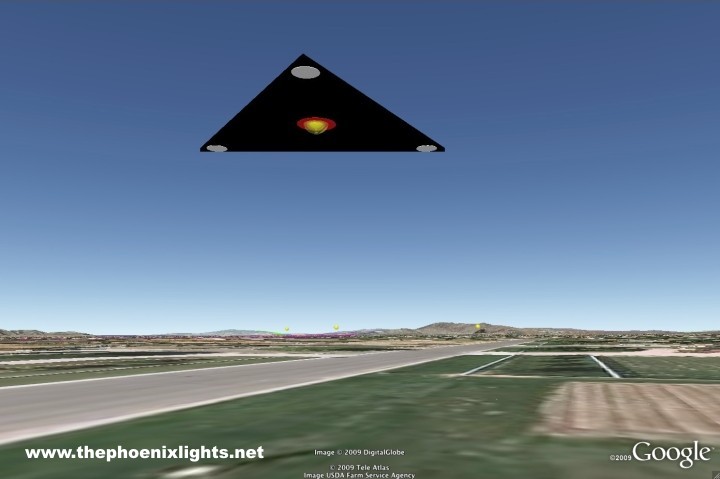 T-2 Equilateral Triangle estimated '2500 ft on a side, three white lights on tips and one red light in center. First observed north of Beeline Highway, traversed Mesa to southeast and last seen at Riggs and power, where the craft appeared to split into two identical copies, which took different headings away from split. 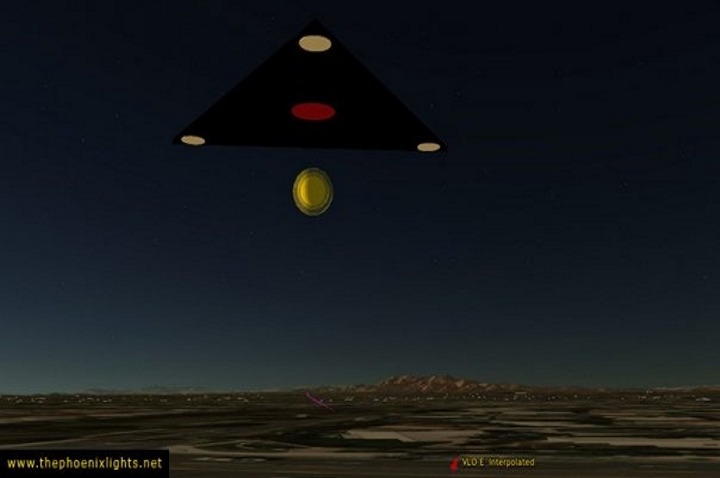 The East Valley Triangle was seen in Mesa and Gilbert. It was observed deploying and recovering orbs during its flight and was seen to diverge into two similar craft south of Gilbert. Later two similar triangle craft were seen to merge into one near Picacho Peak. 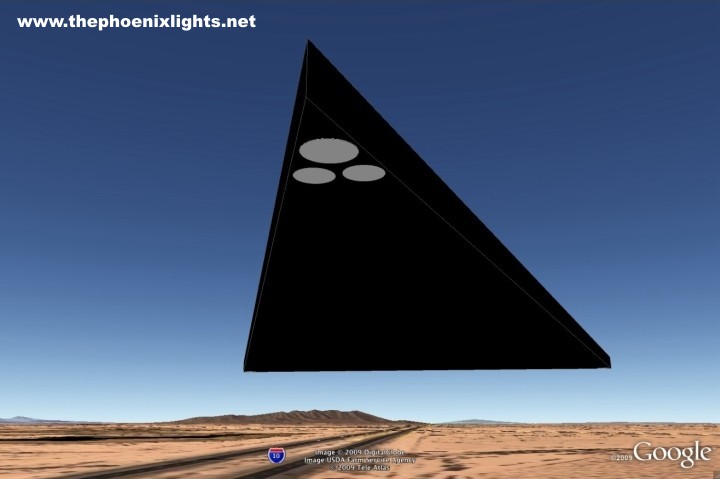 T-3 Mile long black triangle, with configuration of three lights on nose, one on each tip, that over flew witnesses on I-10 going north from Casa Grande towards Phoenix. Not clear if this is the same object as T-1, due to change in aspect ratio. 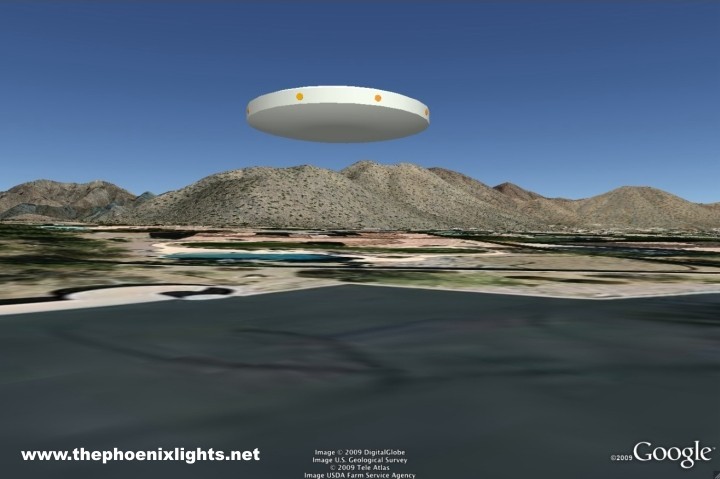 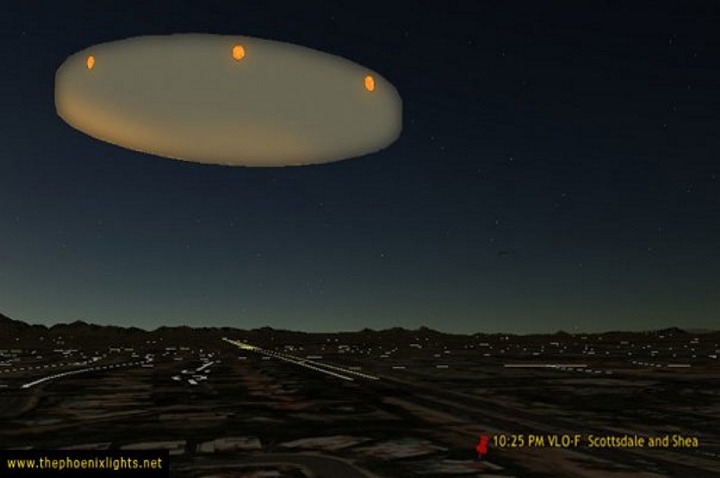 The Scottsdale Discoid was a large pearlescent craft with amber lights that appeared late in the evening over Scottsdale, was observed by an airline pilot traveling south over Scottsdale road and at Scottsdale and Camelback changed course to leave the valley over South Mountain.

"This is one more piece of the overall puzzle provided by a courageous witness who 'came out' over a decade later. Thanks to him and thanks to anyone his choice inspires, the scope of the Phoenix Lights Event continues to become more evident." Larry Lowe

As far as photographic evidence, Dr. Lynne Kitei is the only known Phoenix Lights witness with 35mm photos captured before and after March 13, 1997. In addition, there are a hand full of videos taken during the 3.13.97 AZ Mass Events. PLEASE NOTE that Phoenix Lights witnesses Steve Blonder captured footage of an arrowhead array of lights and Dr. Kitei captured footage of the three end points of a mile wide V/triangle anomaly BEFORE 10 pm. These two videos are both different shapes, locations and times than the boomerang footage, which was filmed AFTER 10 pm. Dr. Kitei's video is the only footage that has been analyzed & authenticated by University & Military optical experts as a True Unknown. It was also reported by Air Traffic Controllers at Sky Harbor International Airport as appearing over Phoenix in Class B Restricted airspace at 1000 feet altitude on 3.13.97 and on 1.23.97, when Dr. Kitei captured 35mm photos of the SAME anomaly in the SAME location, confirmed by the ATCs at Sky Harbor IAP as "six equidistant points of light, over a mile wide, that seemed to be attached to something, turning against the wind as a unit (in a V shape), then elevating slowly and moving over & behind South Mountain". http://www.thephoenixlights.net/Photos.htm